I have always heard people say that when something extremely dangerous happens that time slows down. They are right. Time seemed to stop for a second and I saw, to my horror, that they had turned left in an attempt to turn around, and even though they weren't in my lane yet, I could see that I was going to hit them square in the side if I kept going straight. In this split second span of time my mind searched for possible routes around the van.

Second thought: Go right. Around the back end of the van in the learned, drivers ed. fashion.

Reason(s) for failure:
1. There isn't enough room to turn that sharply; the angle needed would most likely roll the car right into the van killing everyone. Possibility of failure: 98% - 100%

Third thought: Go left. Around the front of the van, off the side of the road.

Reason(s) for failure:
1. This action means turning in front of the van which could cause collision to passenger side.

2. Also, this action requires going into the ditch off the road which might result in rolling the car, blowing out the tires, running into some unseen obstacle in the weeds, or running into the fence. Possibility of failure: 50% - 80%

Keep in mind that these thoughts were going through my head in less than a second of real time because that was about the reaction time. That being said, I did not literally think all those words, but the general ideas were passed through my brain but it was more literally like this, "Thatwayroomnotenoughotherwaychancegonow!" But that's no fun. : )

So I turned left.

It wasn't an immediate, direct drop off the edge of the road since there was a turn off into a field.
So this is where my decision took place 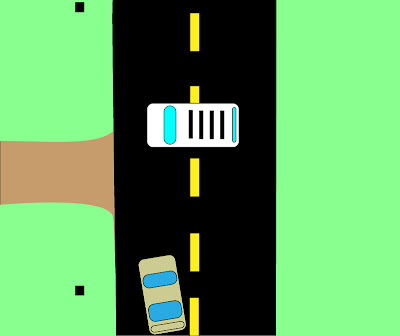 After I turned left. 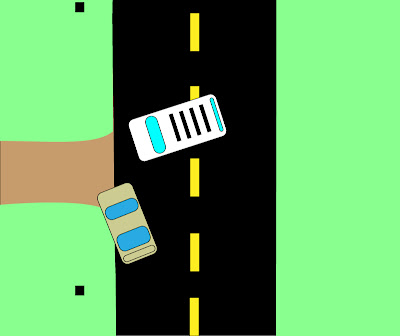 Just before the drop, right when he almost hit me. 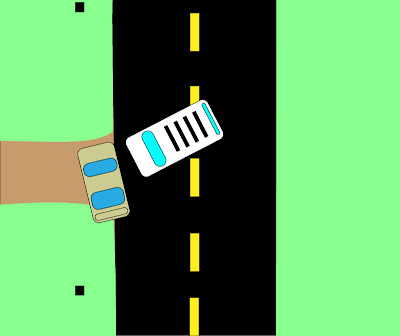 The danger of him hitting me was mostly over but now I had worry about the side of the road. 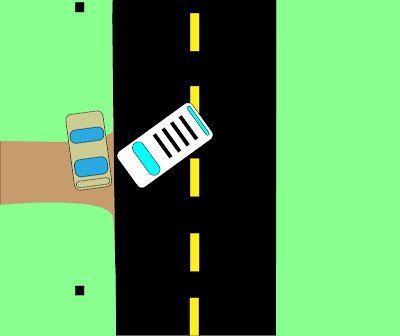 When I was airborne. Well, my front half. I thought I was going to roll here. 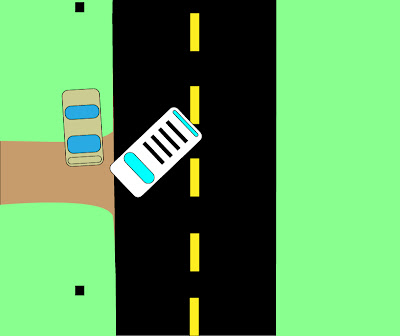 All I was trying to do was maintain control and get back on the road. 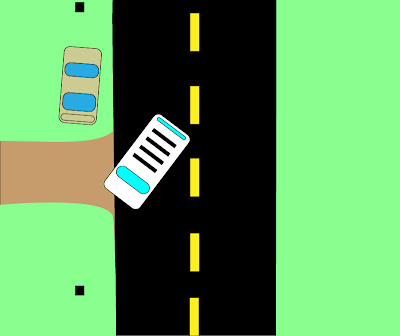 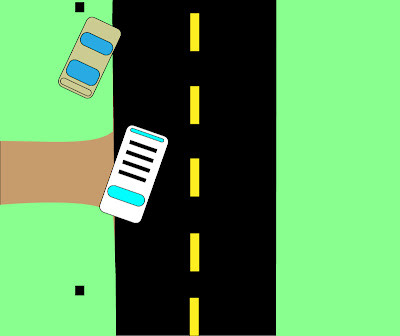 The fear started fading slightly here when I realized that I was still alive. 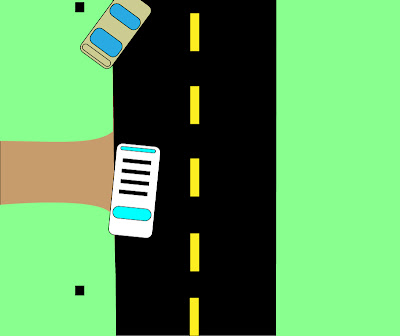 This is where I started hyperventilating. 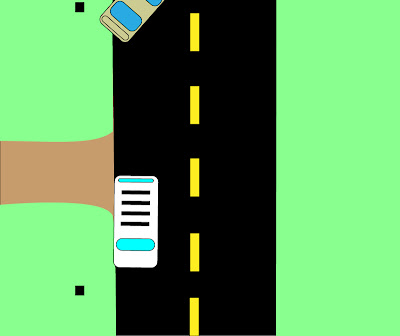 And so there you have it. The closest I have ever come to dying. Now, I KNOW, beyond a shadow of a doubt, that I had someone watching over me and dad. There were so many things that could have gone wrong and killed me, dad and the people in the van. I could have rolled, t-boned, got t-boned, blew a tire or ran into the post or the fence. I must say, even though I had help, my reflexes were very quick too. I'm sure playing video games helped that, believe it or not.
Anyway, I'm glad me, dad and everyone else involved are alive.
{Peace}
P.S. I hope you enjoyed the illustrations. : ) You can thank Adobe Illustrator CS4 for these images. : )
Manufactured by Bronson @ 10:34 PM 3 Bonus Points

You Should All Be Thankful That I'm Writing This Instead of Playing Fallout 3 . . . .

Every so often everyone feels broken in some way or another, lately has been one of those times for me. Not broken as in "I feel like crying", but more of a "I don't feel like I'm working right at the moment." It's certainly strange, there are moments that I feel like almost a superman at work and others when I feel like the only thing I can do is trip over my own feet. In the same shift, nonetheless.
Maybe this new inconsistency is partially due to the fact that my self-esteem is pretty much beyond repair. Take for instance, a computer fan that is on its last leg, sometimes it works like new, quiet, smooth and silent; yet most of the time the fan sounds like it's going to melt, blow up or otherwise cause some untold destruction. That's what my self-esteem "sounds" or feels like right now. One minute I will be on top of the world, and the next I'm thinking that I'm the dirt that no one cares about.
What the exact cause of this is, I'm unsure of. But one thing I do know: the recent* drought of dating or girl interaction in general is certainly one of the contributing factors to my "broken" state. Although I have come to this realization, it has not changed anything. They say, "Knowledge is power," but I say, "Knowledge makes you feel insignificant and useless." Not as catchy, but far more prevalent, in this case at least.
*Please note: by recent I mean about a year and a half and counting.
This general feeling of dirt towards the opposite sex has now seeped into my subconscious, so now, whenever I see a girl that catches my attention, I do a ring check and usually that takes care of any further trouble, but if there isn't a ring, I either, judging by the company she is with, find myself thinking: "She must look older than she looks," or "She is probably texting her boyfriend." Of course most of these assumptions are not backed by any facts, but that doesn't stop me from thinking these depressing thoughts. I know that realistically, my chances with a complete stranger are minuscule to begin with, but it's nice to look around and see possibilities, not dead ends.
It also doesn't help that when I'm at work I see all the happy relationships that all my coworkers are in, whether it be dating, engagement or marriage. I know that none of them mean to, but their actions bring to my mind stark, painful, undimmed memories from when I had a girlfriend. Especially since most of the dating relationships that I'm aware of around the store involve two employees, and my ex-girlfriend was working at the store when I met her (I was working there at the time, too) and about half of the time we were dating. I guess I'm just cursed with those memories until the end of time . . . oh, well.
Well, I will say it. THIS IS NOT FAIR. I'm sick of the short end of the stick getting thrust in my face, even when I just looked at the stick with minor interest. I'm tired of getting judged too quickly. I guess that I should just accept that I got lucky and that's that. I don't want to throw in the towel on this one, but there is really no point in fighting and getting my already broken self-esteem beat viciously into the ground by the merciless hands of the opposite sex. And the most depressing thing is that they don't even know that they are doing it at all. Every girl should have to take a class when they are 12 on how not to abuse the self-esteem of boys. But then, of course, most would take that as an invitation to manipulate males and make our lives a living hell. Oh, wait, that's already true.
Yes, I'm bitter. But I think you would be too if you had been through what I have. Maybe not, maybe everyone out there is better at coping with life than me. It sure seems that way. Well, that is enough bitterness for one night. And to anyone that actually bothered to read all of this post, I congratulate and give you brownie points galore! : )
{Peace}
Manufactured by Bronson @ 12:00 AM 2 Bonus Points